St. Rose High School provides a Catholic education based upon Gospel values and academic excellence. Founded by the Parish community of St. Rose Church and nurtured by the charism of the Sisters of St. Joseph, a St. Rose education instills a spirit of unity with God and others while preparing our students to be disciples of Christ and leaders of tomorrow. 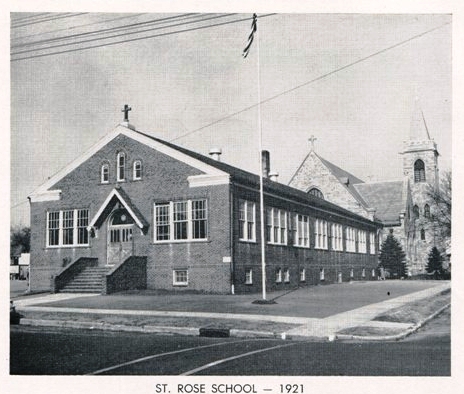 The Parish of St. Rose and the Sisters of Saint Joseph founded St. Rose High School in 1923 under the auspices of the Roman Catholic Church, Diocese of Trenton. The school began in what all fondly refer to as "the red brick," a two story building on 8th Avenue & E Street.

A tragic fire in 1980 necessitated the construction of a new gym, locker and weight rooms, offices and connections to the other school areas.

Two 1990's gifts of Wall Township acreage from Mr. Edward Brown and Mr. Richard Schulz allowed for creation of a much needed outdoor athletic facilities.  The athletic complex will go on to win awards year after year through the dedication of one special faculty member.

On Sunday, October 29, 2012 St. Rose High School was faced with another test of our strength, this time it came in the form of a flood.  Hurricane Sandy hit the Jersey Shore and destroyed the first floor and basement of our campus.  After the isolation was over and cell phones began to work again the news spread quickly of what was left of St. Rose.  After the 800 pounds of fish were removed from the school students and staff returned to a constant buzz of hulking generators and contractors.

In the video above, Mr. Jerry Joyce, hosts a retrospective with many of his current colleagues who were working here a decade ago. The group shares stories and memories from the days leading up to the storm to the aftermath and how the community and the world came together to make St. Rose what it is today.

But within a year, there was hardly a trace of the damage that nearly destroyed our beloved school on the Jersey Shore.  Then principal, Sister Kathy Nace said, “Our faith was really being tested, but we’re bigger than the buildings.”  The school rebounded from a Hurricane Sandy surge that damaged more than 11,000 of our 35,000 square feet facilities.  Our location between the marina and the ocean made us one of the hardest hit schools in the Garden State.  In the iconic photo of the 100s hallways below illustrates how far we have come.  The photo shows a maintenance worker shoveling mud and tiles from a washed-out first-floor hallway, where water nearly reached the pictures on the wall.

Now the same hallway continues to gleam like a car after a new wax job, with our school colors proudly on display. In the video below, Governor Chris Christie spoke on our front steps after touring our campus one year after the storm hit Belmar.

Superstorm Sandy may have damaged our buildings but it has solidified our faith in God’s presence with us and our commitment to our dear St. Rose.

We continue to give thanks for Bishop David M. O’Connell and the Diocese of Trenton for their unwavering commitment to restore our school a decade ago.  God blessed us with many individuals, parishes, schools, organizations and communities who supported us with their prayers and donations during our time in need.  Now here we are ten years later on the precipitous of our Centennial Celebration and while the memories of Superstorm Sandy remain bright in our hearts, in reality they are only a small part of the great story that is St. Rose. Let us remember all the good that became after the water receded and be confident that God has and, in our second century, will continue to bless us as we move forward in our mission of Catholic Education.

In the last decade St. Rose High School has invested millions into the construction of a new science wing, media center/library, and five new learning centers:

To accommodate 21st century learning our Learning Innovations team spent two years researching and implementing a new schedule that would allow our students to exposure to everything we had to offer.  In 2019, the Rotating Drop Schedule was implemented and students take an additional four classes during their high school experience.

Through the kindness and dedication of our alumni and supporters St. Rose has been able to invest in instructional technologies including hardware and software to support 21st century teaching and learning including an infrastructure overhaul project which was completed in January of 2020.

Just like the rest of the world was affected by COVID-19 in March of 2020, St. Rose High School was no different in that respect.  Where we shined was in our ability to leverage the investments we had made to quickly pivot to remote instruction and our students and faculty never missed a beat.

Just in time to usher in the Centennial Celebration year, St. Rose High School welcomed two alumni from the Class of 2005 to help lead the school into the second century.  Mr. Robert Dougherty '05 came on as principal and Mrs. Crystal Ganley was promoted from teacher to Vice-Principal.  Rounding out the leadership team is a dedicated group of highly motivated individuals who each care deeply about St. Rose High School, its students, teachers, alumni, and community members which it has served since 1923.

To some it may just look like a patch of grass or a pile of dirt.  But to our next guest, Mr. Mark Fletcher, it’s the backdrop to the story we are writing here at St. Rose.  Please welcome from the Class of 1990, teacher of social studies and Director of our Athletic Fields, Mr. Mark Fletcher.

Mr. Fletcher is our unsung hero, the undefeated MVP, day and night, with the lights low, the fields emptied, he keeps working to make sure our fields are ready and always looking their best.  And that’s why they have been recognized, 7 years in a row and awarded the Fields of Excellence award.

The land at 5114 West Hurley Pond Road in Wall Township was donated by Edward Brown in 1990 after Mr. Brown spoke at the commencement ceremony where Mr. Fletcher was a senior. A decade later, Mr. Fletcher and his green thumb returned to St. Rose and he has worked to elevate the fields and make it what they are today.

These award winning fields are widely considered the nicest natural grass fields in the area. The Edward I. Brown Complex is a large facility that has two soccer fields, a field hockey field and cross country course in the fall, and three lacrosse fields, a baseball and softball field in the spring.

The "place" however means little without the "people!" Working in close collaboration the Sisters, lay administrators, faculty and staff dedicate themselves to Catholic education and academic excellence. 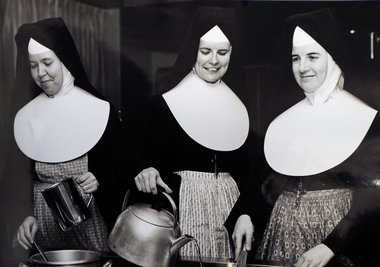 The Sisters of St. Joseph

The Sisters of Saint Joseph of Philadelphia trace their origins and spirit to six women who came together in 1650 in war-ravaged LePuy, France, with great desires for union with God, among themselves and with their neighbors. Encouraged and aided by Jesuit Jean Pierre Medaille, they were among the first to create religious life for women outside cloister. Read More

St. Rose High School welcomes students of diverse backgrounds and talents. Our students are educated in their Catholic and civic responsibilities and challenged to preserve the dignity of all human life.

Fostering the development of each student’s vocational potential, a St. Rose education integrates our Catholic faith, academic excellence, creative expression, the expectations of physical and emotional maturity, and technological competence into the lives of our students. The focus of this integration is to develop a global consciousness in order to meet the ever changing needs of the world community.

Our philosophy is lived out through the core values we hold.

St. Rose fosters a personal relationship with Jesus Christ and communal witness to the Gospel message through

St. Rose is centered on academic excellence with a global consciousness to promote intellectual discipline and growth through

St. Rose establishes a Catholic faith foundation as the basis of educating the whole child from diverse populations through the integration of

St. Rose educates young men and women within the Gospel values to enhance their worldviews, prepare them for professional life, and equip them with the tools of responsible decision-making through programs and activities that develop

St. Rose employs faculty who are committed to supporting and implementing the Catholic mission and philosophy of the school. In collaboration with parents, the first teachers of their children, the administration, faculty, staff, and coaches create a nurturing community is which they